This guides addresses plagiarism in a number of ways. Primarily it serves to educate in-coming students on what constitutes plagiarism and informs them of the policies and procedures for those students accused of acts of plagiarism.

If You Are Accused

If you are accused of plagiarizing, you should expect the following:

There are no guidelines for applying a sanction. It is up to the instructor to decide how severely to penalize the student. In addition to the sanction, the instructor will inform the Office of Student Conduct using an online form of his/her decision to sanction a student for plagiarizing. The instructor can also recommend that further action be taken by requesting that the student's dean investigate degree-related sanctions and/or that the Academic Hearing Panel consider disciplinary sanctions. If that happens and it is determined that more action is needed, the penalties could increase and the student could be removed from his or her academic degree program (major) and possibly even be dismissed from the university.

For first time offenders, students who commit a less-egregious act of plagiarism are sometimes asked to attend "Plagiarism School," discussed later in this guide. For repeat offenders (anyone previously sanctioned for plagiarism and not successful in removing the sanction by appealing) every subsequent sanction for plagiarism will result in a hearing before the Academic Hearing Panel, where all sanctions, including disciplinary sanctions, are considered.

It is extremely important for students to realize that at the point they are informed of their sanction by the Office of Student Conduct all decisions have been made by the instructor. If a student feels that he or she has been unjustly sanctioned, or feels that the sanction applied by the instructor was too severe, the ONLY course of action is to Appeal.

The policy does allow any party involved to appeal decisions of the Academic Hearing Panel. Please refer to the official policy for those details. 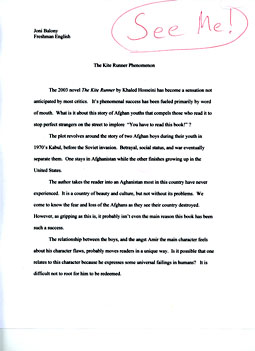