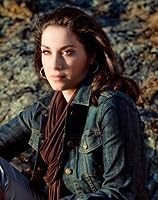 CHEVY STEVENS grew up on a ranch on Vancouver Island and still lives on the island with her husband and daughter. When she’s not working on her next book, she’s camping and canoeing with her family in the local mountains. Her debut novel, STILL MISSING, won the International Thriller Writers Award for Best First Novel. Please visit her at www.chevystevens.com.
https://www.amazon.com/Still-Missing-Chevy-Stevens/dp/0312595670/ref=tmm_hrd_swatch_0?_encoding=UTF8&qid=1561382143&sr=8-2